(sorry if you've seen this elsewhere; it took me long enough to type (while also cooking dinner) that I thought I'd post it as a f'real blog post here, not just Elsewhere.) 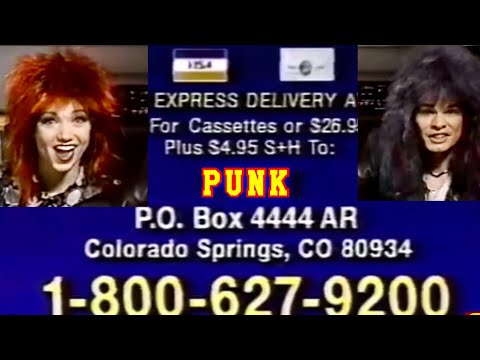 It took me down the following rathole:

Laughing Squid mentioned it in 2012, h/t’ing Uproxx. Neatorama had mentioned it a bit earlier and that reference hit Metafilter, which has a long thread about it (if you only follow one link here, that’s the one).

In 2016 someone scratched his own itch in r/Music and came to the conclusion that this compilation (titled “80s Retro”) has to be the “Punk” one from the commercial. He goes through the trouble of identifying tracks from the Discogs entry not heard in the commercial.

That Redditor was working from this CrapFromThePast page, which extensively studies 90s Razor & Tie compilations. (a sampling: “I dissected many of the following Razor And Tie collections in gory detail, and I can conculde [sic] the following: Most of the tracks sound good, with relatively few instances of excessive compression/limiting, weird EQ, or truncation of an opening note or a fade. ….”)

Something mentioned at least twice in these posts; the actor in the “Punk” ad is almost certainly also in a Those Fabulous 70s compilation ad, and possibly is one of the guys in the universe-famous Freedom Rock ad.

I made a Spotify playlist. It’s basically some better bits of 80s Top 40. (imho.)